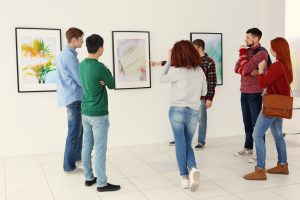 Are you looking for a unique work of art?

If so, head to Kiechel Fine Gallery near our Downtown Lincoln apartments.

Established in 1986, the gallery specializes in 19th and 20th-century American art as well as national contemporary art.

Trained in abstract art, Hal Holoun eventually shifted to landscape paintings as he was fascinated with the interplay between earth and sky. Most of his paintings take place at dusk or dawn as that's when the colors are most intense. Hal has been featured in American Arts magazine, and his work is found in both private and corporate collections nationwide.

Thomas Hart Benton was the son of a Missouri congressman. He grew up traveling on the campaign trail and left home in 1907 to study art at the Art Institute of Chicago and Academie Julian in Paris. He later returned to Missouri to create watercolors of local residents. Some of Thomas' pieces were controversial, making him a well-recognized public figure. When he passed away in 1975, he left behind a body of work that's known as one of the most sweeping chronicles of twentieth-century American culture.

During the early and middle part of the 20th century, Isabel Bishop was a leading printmaker and painter. She focused on the urban life of the people of lower Manhattan and showed sensitivity to their personalities. In 1946, she illustrated the Jane Austen novel Pride and Prejudice, and later became an elected member of the National Academy of Design.

The gallery is open Tuesday through Saturday, and the knowledgeable staff will gladly help you find the perfect piece for your home.

Kiechel Fine Art is just one of the art venues near Academy Lincoln. If you would like to call our community home, please contact us. We would love to show you around.